Following a lovely school visit for Book Week, I was thrilled to run a ‘Design a Character’ competition for the KS2 children at Leigham Primary School, Plymouth.

But, gosh! What a challenge! There were 164 smashing entries from Year 3 up to Year 6 and it was a tough, tough job!

I was presented with original, beautifully illustrated and very well thought out ideas. In fact, it was *so* tough that I had to call on some help from some writerly, illustrator friends! 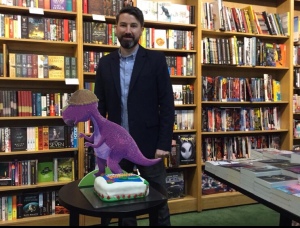 Another debut author, John Condon, of ‘Wondrous Dinosaurium‘ fame, had a soft spot for the following entries:

John said that for him, a great character is one that he looks at and thinks, “Wow, I have never seen this character before and I really want to know more about them.”

The Girl of Two Halves: She has been visualised in a way that tells me she has a split personality; two totally different halves. I’d like to read her story, so I can find out which half wins in the end. Or, perhaps, how these two halves learn to live with one another and maybe even become friends.

The Happy Cactus: It’s very difficult to give an inanimate object personality. Even professional storytellers and artists struggle to do it well. So, it’s a great achievement that the person who created this character has managed to make it so engaging. This funny little cactus has real personality and I want to know more about it.

The Pirate Carrot: I can imagine this carrot sailing the seven seas in search of buried treasure on an exotic island. Or maybe it’s a goody? That’s why it’s is a great character. It’s full of potential for great story telling. So, whoever drew this character had better get writing because they have a story in them that I want to read one day. 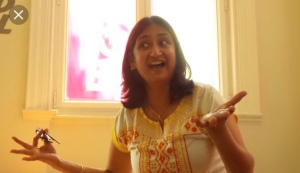 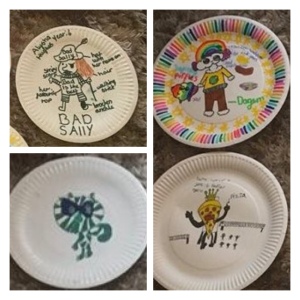 Chitra’s newest book, ‘You’re safe with me,‘ is utterly gorgeous!

Hannah Foley is a debut illustrator from Exeter. She was particularly taken by ‘Cat Burglar,’ because the artist managed to convey real attitude with the body position. She also said, “I love the way they’ve used the glasses and green stripes to add to the effect. Great use of lots of different elements to build up a sense of this being a very cool character.”

Hannah also commended ‘Dogpire’. She loved the facial expression and the way it contrasted with the character’s outfit. Hannah’s first picture book ‘Billy Hippo learns to Swim’ is out now.

Julie Sykes, who has written over 70 books (yes, 70!) but most recently the very shiny Unicorn Academy series, praised ‘Unicorn Mermaid,’ ‘Fire Bird’ and ‘Dogem and Puffles.’

And finally, the partnership behind the brilliant ‘Little Red Reading Hood,’ Lucy Rowland (writer) and Ben Mantle (illustrator) picked their favourites; Lucy liked ‘Diana Doughnut’ and ‘Ice cream cone’ – she thought they’d make a good superhero pairing! Ben also liked ‘Dogpire.’ He thought it was a great character with great name. His second choice was ‘The Alien Cow.’ He was particularly impressed by the lettering… “Moooooo!” 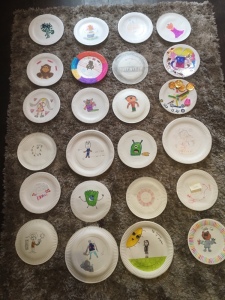 But after *much* deliberation these were the chosen winners, photographed here with their prizes. They were picked for their wonderful illustrations AND interesting character descriptions. 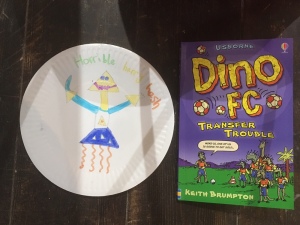 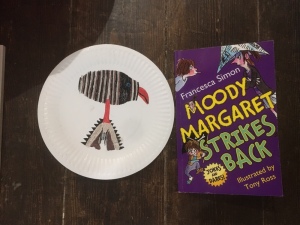 A special mention *has* to go to the creator of ‘Gingerbread Girl’ aka Clare Helen Welsh. We particularly loved the ‘Hope I win!’ line. 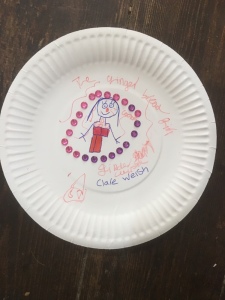 A big, big, ‘thank you’ to my book buddies for lending a hand with this near impossible task. And an enormous ‘well done‘ to all the children who entered. You should all feel very proud. I’m sure we’ve uncovered the illustration and writing stars of the future!

One thought on “‘Design a Character’ Competition”